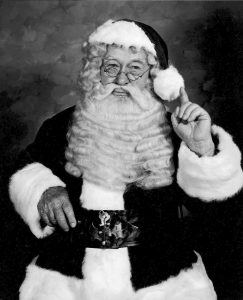 Raymond Joseph “Jim” Yellig has received the Sagamore of the Wabash Award, Indiana’s highest civilian honor. His legacy will be honored during a ceremony at the Santa Claus Museum & Village on Saturday, February 25, 2017, at 11:00 am CT. The Hoosier Santas and honored guests will bestow the award to Yellig’s daughter, Pat Koch. Koch is the founder of the Santa Claus Museum & Village and a 2013 recipient of the Sagamore of the Wabash Award. The ceremony is free and open to the public. A wreath-laying at Yellig’s grave in Mariah Hill, Indiana, will follow the ceremony.

In 2016, the Hoosier Santas launched a petition nominating Yellig for the Sagamore of the Wabash Award. “We, the members of the Santa Claus family and keepers of the Christmas Spirit,” the petition begins, “come together with one voice to request the great state of Indiana bestow its highest civilian honor to a beloved and legendary Santa.” The petition highlights Yellig’s commitment to answering letters sent to Santa Claus, his devotion to spreading Christmas joy, and his legacy within the Santa Claus community.

Tim Etter, a member of the Hoosier Santas and the driving force behind Yellig’s nomination, is honored to be a part of the event. “Santa Jim and his legacy are very well known to southern Indiana and the Santa community,” Etter says, “but this award shares his story with a broader audience and highlights what a treasure Santa Jim is to Santa’s and Hoosiers everywhere.”

Yellig began portraying Santa Claus in 1914, while serving in the United States Navy. After World War I, he returned to his hometown of Mariah Hill, Indiana, and served as the Santa Claus Land (now Holiday World & Splashin’ Safari) Santa for nearly forty years.

“My father truly felt called to his work as Santa Claus. It was a passion and a vocation,” says Pat Koch. “He brought smiles and happiness to countless children during his lifetime.”

The Sagamore of the Wabash Award is a personal tribute usually given to those who have rendered a distinguished service to the state or to the governor. Among these who have received Sagamores are astronauts, presidents, ambassadors, artists, musicians, politicians, and citizens who have contributed greatly to our Hoosier heritage.